I'm a few episodes behind on season 39 of CBS's Survivor, so no doubt others have written at length and in shorter social media posts, but I can't help myself. The episode reeks of both interpersonal and institutionalized sexism. The production team (i.e., institution) confirms their heightened awareness of the issue at hand by opening the episode with this warning: 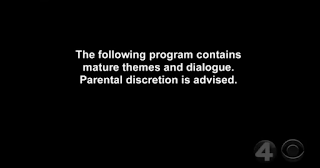 The concerns revolve around contestant, Dan, who's alleged of sexually harassing a number of female contestants. Without getting into all the details, a visibly upset Kellee asserts, "He literally has done this (touched inappropriately) to five different women in this game. This sucks." The production team responds, informing her they can intervene if she wishes (see below, right):

From there, the following messages are shown to the audience, confirming that concerns of sexual harassment are real, as producers state they have met with all contestants and individually with Dan, who was formally warned. Bottom line, the allegations and feelings expressed by female contestants were not considered fabricated.

But then the game play begins. This isn't a blog about who tricked/out played who. This is about manipulating discrimination. In the end after Kellee is ousted from the tribe, Janet finds out she was played by Elizabeth who told her that she felt uncomfortable about Dan's touching. But really, Elizabeth was working along side Dan, and the pitch to Janet about sexual harassment was just game play.

Elizabeth outright admits this, but the primary thing Dan, Missy or anyone else involved really cares about is if their alliance is stable. To be clear, sexual harassment is a form of gender-based discrimination. That's indisputable. Therefore, Elizabeth (and potentially others) consciously used a form of discrimination as game play.

Would it be permissible for a white player to go up to an African American player and say, "Hey, 'player X over there used the n-word'", as a means to advance their game? I don't think so. Why then is it acceptable for people in this season of Survivor to consciously manipulate sexual harassment as part of their strategy?

Then Tribal Council happens again in the episode. The contestants are discussing the issue as the now exiled Kellee must watch in silence. And how problematic is that - the rules of Survivor prohibit a victim from speaking about her victimization while everyone else talks about it right in front of her. Jamal extremely eloquently lays it down, explaining why men should acknowledge their privilege and not question when women and girls express feeling uncomfortable when males touch them inappropriately and/or are sexually assaulted. Listen, it's less than 90 seconds, or read below.


"...I think this issue is a lot bigger than the game of Survivor...from my positionality with my gender, far be it from me to speak for women, what I can do as a man, I can give a little bit of advice as to how hear these stories, when we're talking about harassment, when we're talking about discomfort, when we're talking about male entitlement. It behooves us all as men to take a step back and look at our own behavior, and imagine that you had no idea that what you were doing was inappropriate, that was making someone uncomfortable, and you believe women if they choose to bring that up because it's difficult enough to do that in and of itself. We have a responsibility to hear women, listen to women and believe women when they're ready to tell their stories."

And ultimately what happens after Jamal says this? He's voted off. No, not because he said what he said. The problem is he was kicked off in spite of what he said. Ultimately, the players cared about advancing in the game more than they cared about someone who had the courage to say all the right things regarding this particular form of discrimination, including that sexual harassment is bigger than the game of Survivor.

Unfortunately, no, not in this world. A game for $1,000,000 and all kinds of status ended up being bigger than the manipulation of sexual harassment. Not for Janet - she put aside her game play to try and oust someone who she was told was harassing women. Not for Jamal - he expressed what society needs so desperately to understand. But for the players who colluded to kick Jamal out, his and Janet's efforts to stand up to sexual harassment were superseded by our society's pathetic desire for money and fame, and that's just sad. Unfortunately that's what Survivor is - yeah, a microcosm for society at large, whose values are disgustingly twisted.

And what about Survivor's production team? Are they going to let this go? Apparently it's now acceptable for players to use discrimination as a form of game play. Will they bring this up at the season finale, and do so appropriately? Or will they simply convey, "Sexual harassment is bad and won't be tolerated." Cause fact is, on this episode sexual harassment wasn't just tolerated, it was outright allowed as strategic trickery (Elizabeth admitted it on camera), and the institution sat idly by when that happened.

Discrimination can never be game play, period, because if it is, it communicates that discrimination can be used as "game play" in other social institutions (e.g., work places, schools, sports teams). Why can't the Survivor production team get that? Apologies from the contestants are something, but the institution should have intervened appropriately and immediately.

Further reading: Survivor's "#MeToo moment" protected the game instead of the players