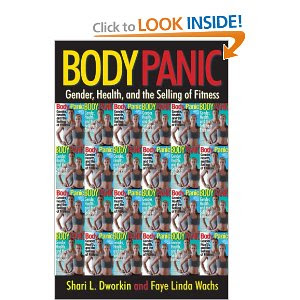 These Reebok Easytone shoe commercials have gone around the sociological blogosphere for quite some time now, so nothing new here.

Still, the Reebok television commercials coupled with those from other companies focused on men illustrate the ways sporting consumer culture objectifies men and women differently, as demonstrated so effectively in Shari Dworkin and Faye Wachs's book, Body Panic: Gender, Health, and the Selling of Fitness.

Reebok's Series of Easytone commercials, fixated so heavily on the "need" for women to have thin and firm legs and buttocks:


A key irony pointed out heavily in Body Panic is that these advertisements have virtually nothing to do with health (e.g., preventing diabetes), despite being part of the popularized "health industry." They have to do with idealized body images that promote a "culture of lack," where consumers are constantly influenced to feel inadequate. However, with each purchase of the next product, they can at least get 1 step closer to being the "perfect" guy or gal.

The ads also generally have nothing to do with athleticism. Most of them are simply fixated on developing an aesthetic ideal, not an athlete's unique musculature that promotes athletic success (which notably, rarely includes massive muscles). Look for example at mixed martial arts star, Randy Couture, in the first male ad presented here. Couture looks nothing like the male model, who is the focus in the ad. Still, successful pro athletes are commonly used to endorse male products significantly more than female "health" products since fitness for males is associated with sport (and the military), while fitness for females is associated with looking favorable for men.

Finally, the authors of Body Panic note that the central figures in these ads (male and female) are overwhelmingly white -- not surprising since Caucasians would be target audience with the most buying power. And this of course simultaneously maginalizes people of color, who are pushed further away from the constructed beauty ideal.

Again, a highly suggested read for those interested in gender, popular culture, sport, and health -- Body Panic: Gender, Health, and the Selling of Fitness.