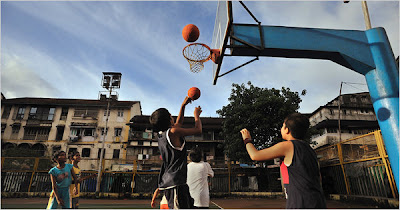 The N.B.A. has built community basketball courts in neighborhoods across India, like Nagpada in Mumbai.

Kobe Bryant is the most popular basketball player in China, but there is no denying that basketball in China was given a colossal push when Yao Ming made it to the N.B.A.'s Houston Rockets and quickly emerged as a star player. In an interesting article in The New York Times, Jeremy Kahn refers to Ming's impact in China as a "Yao Ming Moment" -- the point when Ming served as a catalyst who invigorated a critical mass of Chinese basketball fans that would not just follow Ming, but become fans of the N.B.A. in general.

With a critical mass of Chinese now playing basketball and firmly following the N.B.A., the league is turning to the world's second most populated country, India, in hopes that the sport's relatively inexpensive structure will eventually stimulate an "Indian Yao" and new mass market:

... basketball’s popularity could grow rapidly in India because of the sport’s relative simplicity and the fact that a court can be created almost anywhere one can hang a hoop. This gives it an advantage over soccer and cricket, which require open fields. Basketball also requires little
specialized equipment.

A core part of the N.B.A.’s expansion strategy in India is increasing grass-roots participation, based on the belief that people who play basketball are also more likely to follow the N.B.A. The league also knows that the more Indians who play basketball, the more likely it is that one day an Indian player will be good enough to make the leap to the N.B.A. — an event that could vastly expand the league’s popularity in the world’s second-most-populous nation.

Considering the N.B.A. a global business, it is important to illustrate how players are constructed as international symbols, used to further the capitalist culture. As explained in Robbins's (2011) Global Problems and the Culture of Capitalism, the capitalist culture, or consumer culture specifically, divides people into three distinct statuses, which each have separately defined roles in perpetuating mass accumulation:

But there are what Robbins refers to as "sandpainters," who truly orchestrate society's obsession with mass consumption.

...every society has its sandpainters, those individuals who are given or who take responsibility for representing the universe to others and who have the power to define those elements that are essential for others in locating and defining their identities.... In capitalism, the sandpainter works in churches, synagogues, or mosques, and in theaters, in front of television sets, at sporting events, or in the shopping malls that reaffirm the vision of abundance central to the consumers' view of the world. Contemporary sandpainters...create a vision of the world designed to maximize the production and consumption of goods. (p. 13).

In this case, the N.B.A. executives who begin their early marketing stages in India are the "sandpainters" who hope to find their first symbolic Indian basketball player that will turn basketball into a perceived need for that critical mass of Indian boys and young men -- the potential consumer group. More from The NY Times article:

A core part of the N.B.A.’s expansion strategy in India is increasing grass-roots participation, based on the belief that people who play basketball are also more likely to follow the N.B.A. The league also knows that the more Indians who play basketball, the more likely it is that one day an Indian player will be good enough to make the leap to the N.B.A. — an event that could vastly expand the league’s popularity in the world’s second-most-populous nation.

As the N.B.A. sandpainters take their early steps, building a perceived need for basketball among Indian boys and young men through the development of the first Indian star with mad basketball skills, a few questions are worth asking. Is the N.B.A. truly trying to spread the game for the sake of community development? Or, is it about developing the next big market that will purchase Kobe's and LeBron's jerseys?

Photo via The New York Times

academics
Posted by David Mayeda at 9:18 PM No comments:

This is SportsCenter: The Predictable Gender Trend

This is SportsCenter is the name of a series of comical television commercials run by ESPN to promote their SportsCenter sports news show. The ads are presented in a deadpan mockumentary style, lampooning various aspects of sports, and sports broadcasting. The commercials debuted in 1994.

As of tonight (December 24, 2010), ESPN’s YouTube channel profiles 77 of these short videos. Not every "This is SportsCenter" commercial is profiled, but I'm just going with what is up on this page now as the sample data set. I generally enjoy these commercials. Many of them are witty, and they are all short (around 30 seconds). Here are a few examples:

As can be seen, the commercials typically profile a famous athlete and/or a SportsCenter anchor, and on occasion a non-sports-related celebrity (e.g., Richard Simmons). In examining what athletes the commercials profile on


ESPN's YouTube page, a highly predictable trend emerges. Here are the individual athletes the commercials profile (note: when no athletes are profiled and only anchors, gender of anchors profiled noted instead):

When going through the data set, we find that out of the 77 commercials, women only appear 8 times (10.4%), in some cases in relatively peripheral roles. When looking specifically at athletes, only 3 female athletes are profiled, all 3 of whom represent historically "acceptibly feminine" sports: Mary Lou Retton and Kerri Strug (both gymnasts) and Maria Sharapova (tennis). One commercial profiles Pat Summit, the famous women's basketball coach from the University of Tennessee. All other commercials featuring athletes have males.

Examining the content of the commercials is also important. For instance, the commercial with Sharapova clearly relies on Sharapova's status as a femininized beauty figure in athletics. And while all the commercials are "presented in deadpan mockumentary style," the humor clearly calls upon dominant notions of heterosexual masculinity -- take for example the commercials that mock femininity among males, such as those in which the male anchors share makeup and mock Richard Simmons as a conditioning coach.

The trends shown here are highly predictable. It is hardly surprising that males are over-represented numerically in the commercials, both as athletes and anchors. Likewise, it is unsurprising that the humor utilized in these commercials so often mocks femininity among males in the sporting world or uses female athletes as sexualized figures.

What we see here in ESPN's "This is SportsCenter" commercials is the typical way that gender is constructed in sport -- patriarchy is reified within an institution historically reserved for heterosexual males.

Seriously, someone should create a sociology blog dedicated entirely to critiquing reality television. I suppose you'd have to be kind of a reality TV-nut, but the content would be limitless. I caught a little bit of a reality TV show called "Bridalplasty" today and couldn't watch much, so correct me if I'm wrong in the show's premise.

From what I could tell, the show revolves around engaged women competing for two things: (1) a paid celebrity-esque dream wedding; and (2) paid plastic surgery to "improve" the way they look for the dream wedding. As with most reality shows, the contestants go through a series of competitions that provoke conflict and drama as winners of competitions move on and losers are dropped.

The show exemplifies hegemonic masculinity working at its best:

Another way of putting it, the show is among the most extreme examples of emphasized femininity -- women heighten the focus they place on physical appearance, are willing to risk their own health in doing so, and further value themesleves through a dream wedding that will last a day. All this in the name of being attractive for their male fiancees.

I've written a few other entries on the ways that gender is constructed in mobile phone commercials (see here and here). And here is another commercial, clearly relying on gender-role expectations for Net10:

Posted by David Mayeda at 10:34 PM No comments:

Sometimes it's difficult for me to reconclie being a football fan. As you can see in the video, he got up and walked away on his own.

Made me think neckrolls might be appropriate for the NFL.
Posted by David Mayeda at 3:02 PM No comments: 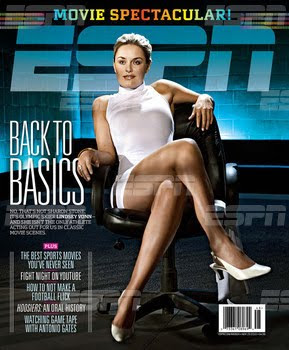 ESPN The Magazine has a "Movie Spectacular" edition that was released Nov. 29. The edition features a number of stories related to sports films, including pictures of contemporary pro athletes re-enacting iconic images from famous movies.

Some of the pictures include race car driver, Danica Patrick in the movie, "Anchorman," Baron Davis and Terry Kennedy in "Back to the Future," and Tank Johnson, Dhani Jones, and Chad Ochocinco in "The Hangover" (see, below).
Not surprisingly, however, ski racer and Olympic gold medalist, Lindsey Vonn, made the magazine's cover, as she portrayed Sharon Stone's highly sexualized character from "Basic Instinct" back in the early 1990s.

There is not a whole lot to say here, other than this is yet another example of the pathway female athletes can follow if they want to "out-stage" their male counterparts -- by promoting a heightened sexuality. While the other famous athletes do get exposure within the magazine's pages, Vonn graces the cover by showing skin and re-creating a film scene that exudes sexual aggression.

In this constructed combination of sport, sex, and cinema, we see how ESPN -- a media giant in the sporting industry -- markets its magazine to what is likely a predominantly male, heterosexual audience. 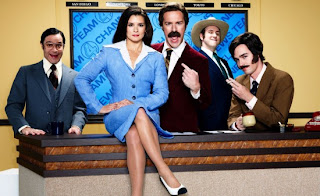 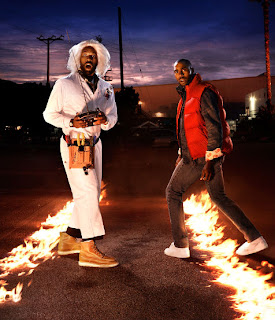 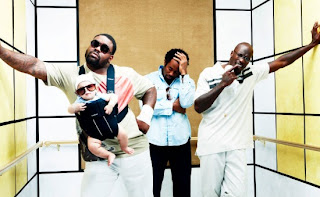