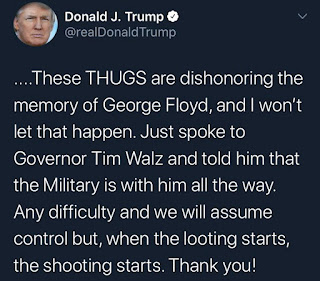 In the aftermath of George Floyd's murder, coming at the hands (or knee) of white police officer, Derek Chauvin, uprisings have sprouted across the United States. The largest and most intense are understandably in Minneapolis, where the tragedy transpired. Not too long ago or far away in 2016, Philando Castile was shot and killed by an officer in Falcon Heights, Minnesota after indicating he was carrying a legal firearm and telling the officer he was not reaching for it. Both tragedies share a range of key characteristics that are all too familiar and anxiety-provoking for African American communities:

* In some cases, vigilante figures are not formally connected to law enforcement, but claim enforcement rights in their neighborhood or hold former law enforcement connections. Think George Zimmerman who killed Trayvon Martin and Gregory and Travis McMichael who killed Ahmaud Arbery.

Over-criminalization of African American males is nothing new in American history. Following the abolition of slavery, the American south saw the rise of the Ku Klux Klan. Absent the institution of slavery, legal mechanisms that could oppress African Americans were less ubiquitous and less formal. Thus, the Klan implemented their own form of terrorism, relying on a strategically constructed image of black men as sexual predators. As Hodes (1993) writes, "In the minds of Klansmen and their sympathizers, the rape of white women was the logical extreme to which black men would go without the institution of slavery to restrain them" (p. 409); in short, without slavery, white racists needed to fabricate dangerous images of black men in order to justify their continued violent oppression. Unsurprisingly, it was after slavery's abolition that lynchings festered in the south under that region's enforcers.

But that was roughly one and a half centuries ago. Since then society has advanced tremendously, specifically with respect to our justice systems and technologies. Today, we have established law enforcement, court and corrections systems that are not supposed to demonstrate biases. And more germane to this piece, we have technologies that can capture interactions between police and alleged criminals that were non-existent even in the 1980s. 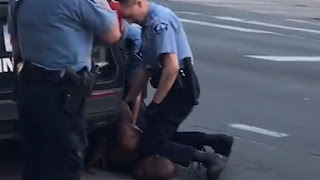 Panoptic Eye over Police Undercut by Power of Racism
Michel Foucault's notion of pantopticism suggests that in the modern era, technologies control workers, as managers are able to maintain a constant watch over employees. Management may not actually be watching, but workers wonder if they are, and they can't watch management. Thus workers are incessantly anxious and in turn obedient. Given the level of technology in modern society, shouldn't police be anxious enough not to abuse their authority?

If we go back to March 1991, Los Angeles resident George Holliday used his VCR to film four white LAPD officers - Stacey Koon, Theodore Briseno, Laurence Powell and Timothy Wind as they beat Rodney King, striking King with metal batons at least 56 times, resulting in 11 skull fractures. Indeed, King was committing crimes (driving under the influence, evading arrest), but the level of punishment was disproportionate, to say the least. 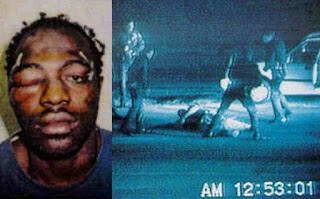 Of course the other key element of the story emerges April 29, 1992, when the four officers were acquitted, in spite of the video evidence that was disseminated across the world. Their acquittal sparked an uprising across Los Angeles resulting in 58 deaths, over 2000 injured and $785 million in property damage (Loyd, 2012, p. 432). Why so much rage, why so much destruction?

For African Americans in Los Angeles (and beyond) King's violent victimization wasn't an isolated incident. Rather, it represented the first time a pattern was proven through visceral video imagery to the international public, catalyzing a rage also reflected during the Watts uprising of 1965, but which at that time lacked the panoptic power of citizen journalism.

Moving forward to the 2010's, citizens across the world were armed with quickly accessible smart phones, there to film and live stream potential cases of police brutality, including those gone lethal. With patterned examples of deathly excessive force inflicted upon African American victims proven through video and disseminated to the world, society would expect to see a change judicial outcomes. Of course instead, justice has been denied, as communicated through this post spreading across social media, also speaking to white privilege:


I can go jogging (#AmaudArbery).I can relax in the comfort of my own home (#BothemSean, #AtatianaJefferson, #BreonnaTaylor).I can ask for help after being in a car crash (#JonathanFerrell and #RenishaMcBride).I can have a cellphone (#StephonClark).I can leave a party to get to safety (#JordanEdwards).I can play loud music (#JordanDavis).I can sell CD's (#AltonSterling).I can sleep (#AiyanaJones)I can walk from the corner store (#MikeBrown).I can play cops and robbers (#TamirRice).I can go to church (Charleston9).I can walk home with Skittles (#TrayvonMartin).I can hold a hair brush while leaving my own bachelor party (#SeanBell).I can party on New Years (#OscarGrant).I can get a traffic ticket (#SandraBland).I can lawfully carry a weapon (#PhilandoCastile).I can break down on a public road with car problems (#CoreyJones).I can shop at Walmart (#JohnCrawford) .I can have a disabled vehicle (#TerrenceCrutcher).I can read a book in my own car (#KeithScott).I can be a 10yr old walking with our grandfather (#CliffordGlover).I can decorate for a party (#ClaudeReese).I can ask a cop a question (#RandyEvans).I can cash a check in peace (#YvonneSmallwood).I can take out my wallet (#AmadouDiallo).I can run (#WalterScott).I can breathe ( #EricGarner).I can live (#FreddieGray).I can ask someone to put a leash on their dog when it is required in the public park we are in (#christiancooper).I CAN BE ARRESTED WITHOUT THE FEAR OF BEING MURDERED. (#GeorgeFloyd)

African American communities and their allies realize nearly 30 years after the uprisings in Los Angeles, even with the advent of digital proof, we still fail to see justice. To this end, "It's worse today than it was back then." 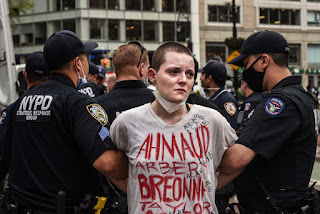 Anger - Including Violent Anger - must be Contextualized
By sating, "...when the looting starts, the shooting starts," the POTUS is expressing an insensitivity to the most recent example of lethal police misconduct inflicted upon African Americans. Additionally, he is demonstrating an ignorance to patterned racial injustice. The mass anger we are seeing now is far more reflective of a revolution grounded in demands for justice than it is looting. Thus as POTUS and his followers fixate on looting and responding to it with threats to "shoot," they are dismissing the fundamental social concern. 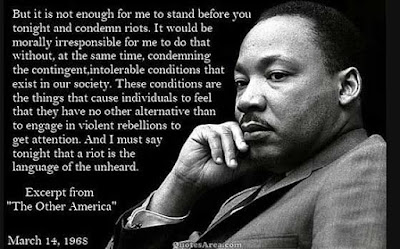 When critique, outrage and anger regarding looting overtakes critique, outrage and anger regarding patterns of lethal police discrimination, a deep seeded racism is exposed. As activists are demanding, if society wants to see less violent revolution, it needs to see its justice systems and political leaders admit their racist faults and radically shift their practices. 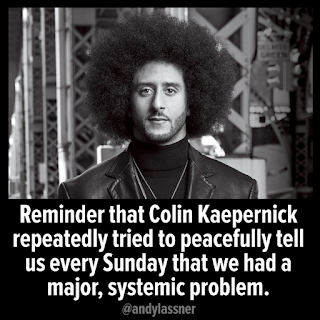 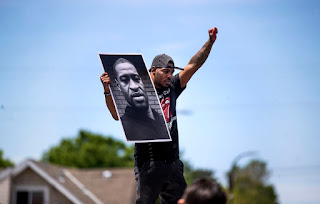 References:
Hodes, M. (1993). The sexualization of reconstruction politics: white women and black men in the South after the Civil War. Journal of the History of Sexuality, 3(3), 402-417.