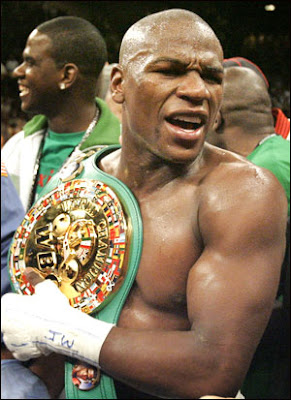 If you haven't heard Floyd "Money" Mayweather's recent rant directed towards boxing's current pound-for-pound king, Filipino boxer, Manny "Pacman" Pacquiao, it's worth a listen. YouTube has removed the video, though it can still be seen (and heard) in its entirety HERE. Be forewarned, the content is disturbing to say the least.

Systemic discrimination in sport is nothing new. As I've documented in my blog time and time again, sexism ("America's Favorite Athletes"; "Yankee Babes vs Phille Babes"; "Blatant Sexism Tolerated"), homophobia ("Homophobic 'Slip'"; "MMA Does Not Get a Pass on Discrimination"), and classism ("Theorizing Violence in Sport"; "Marxist MMA") are rampant in contemporary sport...as is racism.

Attempting to belittle Pacquiao, Mayweather uses blatant racialized language. Embellishing verbal jabs is common in combat sports -- a promotional tactic used to build hype in the midst of long layoffs in between fights. Whether Mayweather is attempting to build "heat" for a possible showdown with Pacquiao or not, the public utilization of racism, homophobia, and xenophobia is unacceptable and requires regulation by the boxing organizations that profit from such promotional tactics. Some of Mayweather's racist, xenophobic, and homophobic words:

Again, it is not as if this is simply an individual act operating in a vacuum. True, Mayweather may have made these statements on his own. However, he is not the only individual who benefits from these discriminatory statements. Should a Pacquiao-Mayweather mega-fight happen, Mayweather, his opponent (yes, Pacquiao), promoters, the venue owner(s), television pay-per-view companies, etc. will all benefit financially from this type of disgusting discriminatory hype.

In short, the entire industry benefits financially from blatant discrimination. Therefore, it is up to individual athletes and the institutional organizations that run various sports to outlaw discriminatory behavior. As long as the organizations and their leadership allow for this type of glaring discrimination to continue, they are not only complicit in the problem. As direct beneficiaries, they actively contribute to the problem, while sitting covertly in the shadows.

Up next: James "Lights Out" Toney's use of homophobia in MMA.

Photo via The Examiner

Posted by David Mayeda at 3:38 AM No comments: