The Sociology of MMA: MMA Compared to Pro Wrestling and Other Sports

Shane Logan has an interesting 15-minute presentation through TED on masculinity and MMA. There's some good sociology in the talk (good conceptually, I would have liked to have seen more empirical evidence from his 2 years in the field, but he only had 15 minutes), specifically pinpointing how meso and macro forces influence men's decisions to engage in the sport. See the video, below:

Personally, I believe the meso reasons to be more valid. A desire towards some form of hegemonic masculine status in my experience appears to drive more men into practicing MMA, as hobbyists, semi-pro's, and full on professionals. I wonder if Logan's interviews actually revealed that a large number of MMA practitioners followed WWF back in the 1980s. I am sure some did, perhaps even a substantial proportion (I know I did). But my guess is a large number didn't as well, and even despise the comparison.


Also, there's quite a few mentions of MMA being compared to a "fight to the death" kind of thing, or at least using that kind of sensationalized language. That's just not necessary. The sport's been around long enough that any critique can and should be more objective. It's not 2 guys trying to kill each other in practice/competition, though the mainstream MMA media may present it that way to sell tickets.


And finally, the close noting that MMA is an escalation of violence from WWF/WWE is a bit premature. Are there really more injuries or deaths from sanctioned MMA than pro wrestling? More steroid use? Are the social messages expressed in MMA (harmful as they often are) more harmful than those expressed in professional wrestling? I'd like to see some empirical evidence to prove MMA is more dangerous than pro wrestling and the most dangerous sport out there before such things are stated.

The Sociology of MMA: Feminized Labels as Insults 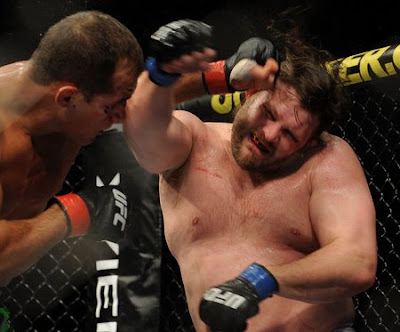 Just another quick example here of how men in sport - particularly those in "rough and tumble" sports where women are largely excluded - continue to put down their adversaries by feminizing them. In this example, Ultimate Fighting Championship (UFC) fighter, Roy Nelson, identifies UFC President, Dana White, as his wife as a way of insulting him. Okay, this broad tactic of men feminizing other men to insult them is nothing new, but it's the way Nelson does it that is interesting. See, below, via MMAMania:

"You just got remember that mine and Dana White's relationship is like we're a husband and wife. I do the man's stuff around the house. I do the fighting, all the man's stuff and he does all the woman stuff - all the yapping. He's more the 21st century, he's the one who goes out and probably makes more money. Where as I might make sure the house is clean, and all that, but at the end of the day I still do the man's stuff - the lawn, the fighting, all the hard stuff. It's one of those relationships were there's love and hate. We're in one of those things like a speed bump. I don't know if we need a separation from one another. I think The Ultimate Fighter was our separation ... but now we're back together and holding hands and all that stuff."

The most interesting part of Nelson's quote is how he likens White to his wife in order to insult him by (1) spotlighting their income differences, (2) associating White's higher income to women's upward social mobility, and therefore (3) trivializing women's increased income relative to so-called "men's work" (mowing the lawn, fighting, and hard stuff).

As women in societies move closer to men in various spheres, such as work, men will cope with their gendered insecurities by finding ways to re-claim their power and control over women. Hence, with the so-called man-cession, "real" men like Nelson can still point out their physical, rugged masculinity as identifiers of superiority over women (and feminized men), even those who have higher incomes.

And this is how hegemonic masculinity works. Whether it's in jest or not, men try to feminize others (other men and women) as a way to put them down. White could just as easily come back and feminize Nelson by insulting his physique, lower income, or lack of power in the mixed martial arts industry as un-manly. So basically in this hyper-masculine context, anything associated with femininity is bad.

academics blogs
Posted by David Mayeda at 7:20 PM No comments: