Let's Hold Obama To It

Okay, so Obama pulled it off. I'm happy, but more so relieved that Romney didn't win. In typical Obama fashion, a well delivered victory speech:


"We believe in a generous America, in a compassionate America, in a tolerant America open to the dreams of an immigrant's daughter who studies in our schools and pledges to our flag..."


"America, I believe we can build on the progress we've made and continue to fight for new jobs and new opportunities and new security for the middle class. I believe we can keep the promise of our founding, the idea that if you're willing to work hard, it doesn't matter who you are or where you come from or what you look like or where you love. It doesn't matter whether you're black or white or Hispanic or Asian or Native American or young or old or rich or poor, abled, disabled, gay or straight. You can make it here in America if you're willing to try."


Well, in reality, I disagree because discrimination and inequality still exists. Too many Americans won't keep that promise because America is still ensconced with significant bigotry and ignorance that won't let so many minorities succeed no matter how hard they work. However, the ideal is nice to express, and let's face it, you would never hear such a message from Romney or really any other prominent Republican candidate that speaks appreciably to that level of diversity.

So, now, it's time to hold President Obama to being the progressive president he claimed to be four years ago. There's no campaigning to worry about four years from now. Get it done!
Posted by David Mayeda at 5:57 AM 4 comments:

Patriarchy is defined as “…a form of social organization in which cultural and institutional beliefs and patterns accept, support, and reproduce the domination of women and younger men by older or more powerful men. Literally the ‘rule of the fathers,’ today sociologists view as patriarchal any system that contributes to the social, cultural, and economic superiority or hegemony of men.” If the American public elects Republican nominee Mitt Romney to presidency, they will be further entrenching a system of patriarchy where old men utilize methods of social control to repress women.
Throughout the 2012 U.S. presidential campaigns, women’s rights have been a major issue. While President Obama has offered more specific examples of how his administration supports women’s rights, candidate Romney has argued his proposed policies would be more supportive of women through a revamping of economic policies. A closer look at Romney’s perspectives on social issues specific to women’s rights, however, demonstrates that Romney would push America into a patriarchal abyss where wealthy men in positions of power dictate women’s decisions.
First of all, let’s not forget that Romney has openly supported Republican politician Richard Mourdock, a man who claims, “Even when life begins in that horrible situation of rape, that it is something that God intended to happen.” Irrespective of how such sentiments are framed (i.e., focused on offspring or how offspring were conceived), you have men in extreme positions of power supporting one another in an attempt to limit women’s control over their own bodies (tell ‘em Cher; see video, below).

Romney's support of Mourdock is a classic example of patriarchy, where the institutions of government and religion combine to constrain women’s choices. The connection to government is obvious (these are politicians talking here), but also note Mourdock’s quote, which pays homage to “God.” Hence, it is simultaneously government and religion that are used in tandem as institutions of social control, which would render most women criminal if they were to choose abortion under a Romney presidency. As stated on Romney’s official website, “[Romney] believes that the right next step is for the Supreme Court to overturn Roe v. Wade” (and notably limits “defining marriage as between one man and one woman”).
Romney, of course paints himself as a “moderate” Republican. The party’s official stance on abortion, and that of Republican Vice Presidential candidate Paul Ryan, calls for total elimination of abortion rights – even if conception was the result of rape, incest, or if the birth of a child threatens a mother’s life. There would be literally no exceptions. As a self-proclaimed moderate, Romney would allow for these three exceptions to stand. Still, as Katha Pollitt argues, a Romney change in policy would criminalize the vast majority of women who want and/or need an abortion:

Romney, in fact, supports banning abortion except in cases of rape or incest, or to save the woman’s life. He’s running ads that tout these exceptions as evidence of his moderation, but what kind of moderate wants to criminalize 93 percent of all abortions? Among those who would not be lucky enough to qualify for Romney’s exceptions are women carrying fetusus with fatal conditions, the mentally ill and pregnant women at risk for any injury short of death. In reality, Romney would criminalize most abortions for rape and incest victims, too, since most rapes and incest are not reported…

Furthermore, a Romney administration would likely end aspects of “Obamacare” that enable working women “to obtain contraception, annual well-woman visits, screenings for sexually transmitted infections and gestational diabetes, breastfeeding support and supplies, and domestic violence screenings without any co-pays or deductibles.” And finally, a Romney administration would certainly end all federal funding to Planned Parenthood.
As stated by Romney, “Planned Parenthood is a private organization. What I want to get rid of is the federal funding of Planned Parenthood.” But deteriorating support for Planned Parenthood means decreasing federal support for cancer screenings and perhaps unsurprisingly related to the criminalization of abortion, birth control. So here we have a man hoping to end access to birth control, which would help decrease unwanted pregnancies and in turn, abortions, a practice this same man wants to criminalize! Neither the irony nor the patriarchy in a Romney/Ryan administration could be more obvious.
Granted, voting for Obama will not end patriarchy in the United States or even in government specifically. The Obama administration has not been perfect and could have done much more the last four years. But to vote for Romney/Ryan is to vote for a much more overt and pointed patriarchy; it is to vote for a country where a few men in extreme positions of power control women by limiting their choices. Is this the direction our world should be moving?

Within the party, leadership admits Republican disapproval directed towards President Obama is tied heavily to ongoing racist values.  Via the Huffington Post:


Such trends noted above by Lawrence Wilkerson help to explain that which has been made clear by the Washington Post -- the upcoming presidential election looks to be one very much divided along racial lines. As noted in the article, comparing trends from 2008, "Romney appears to have made no inroads in chipping away at Obama's support among Hispanics and African Americans" and further, that "Fully 91 percent of Romney’s support comes from white voters." Oddly enough, the Romney preference among white voters is tied heavily to perceptions that Romney would do more to help the American economy:

There is no way to tell from these findings what role, if any, racial prejudice may play on either side of the racial gap. But the data suggest that concern about the economy is amplifying the division, as Obama’s decline in support among white voters appears to be closely linked to views of his handling of the economy. And yet minorities have suffered severe unemployment and housing foreclosures in the current economy as well.


Romney's economic policies, however, are most clearly illustrated in action. Production for Romney paraphernalia is not happening in the United States. Rather, it is happening abroad. How exactly does that promote American jobs and the broader economy? It doesn't. See picture, below: 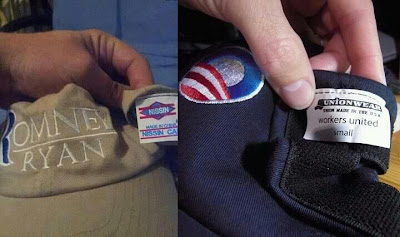 And if considering global perceptions, the BBC polled a sample of 21,797 people from 21 countries to get a gauge on the world's preference between Obama and Romney. Only Pakistan showed a preference for Romney, and a narrow one at that. Those polled from every other country expressed a strong preference for Obama, exhibiting the more positive global reputation Obama has achieved over the past four years. See the graphic, below:

We don't live in isolation, and the United States is not an ethnically homogeneous country.  Romney is NOT the answer.